A Duty to Protest

At 17, Tim Butz enlisted in the Air Force and did a tour of duty in Vietnam, following four generations of men in his family serving in uniform dating back to the Civil War. After being honorably discharged in 1969, he enrolled at Kent State University in Ohio. Just more than a year later, on May 4, 1970, the National Guard opened fire on protesters at Kent State and Butz was there. The Kent State shootings not only deeply intensified Butz’ own previously conflicted opposition to the war but increased the U.S. public’s concerns as well. Butz became one of the national organizers of the Vietnam veterans protest movement and spent the following three decades of his career fighting for the disabled, fair housing and civil liberties. A former Executive Director of ACLU Nebraska and the Nebraska Justice Center, and former Assistant Director of the Fair Housing Center of Nebraska and Iowa, Butz now volunteers at his local Disabled American Veterans office, connecting with veterans from various conflicts. He shares his perspective on the Vietnam War and how those issues reverberate still today. 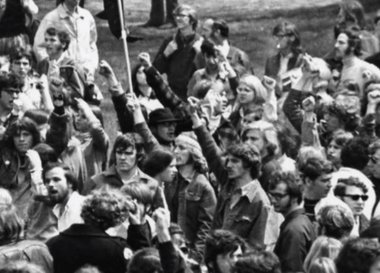 Photo Gallery: A Duty to Protest