While working the NET documentary "Standing Bear's Footsteps," Princella Parker discovered the story of Susette La Flesche, a highly educated woman who was the daughter of Omaha Indian Chief Iron Eye. To her tribe, La Flesche was known as Bright Eyes and she was a tireless champion for Native American rights at the time when northern tribes were forcibly removed to reservations. La Flesche is one of five women in the Nebraska Hall of Fame. 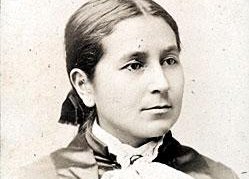